Posted on September 25, 2017 by bermanevansretail

Yes, iPhones are a big deal, which we discussed on Evans on Marketing when the 10th anniversary models were unveiled. Since introduction, the iPhone has represented a HUGE percentage of Apple’s total revenues.

As the following chart from Statista shows:

“Since 2007, Apple’s iPhone sales have consistently increased. It has gone from 40 million units sold in 2010 to more than 212 million in 2016. iPhone sales worldwide were over 136 billion U.S. dollars in 2016. As sales increased, the iPhone gained within the company. It has become the most successful Apple product to date. The iPhone’s share of the total revenue has jumped from 25 percent in the beginning of 2009 to 70 percent in the first quarter of 2017. As of the first quarter of 2017, iPhone’s share of revenue was at 69.4 percent. Much of the iPhone’s success can be attributed to Apple’s ability to be competitive, with new releases and updates.” 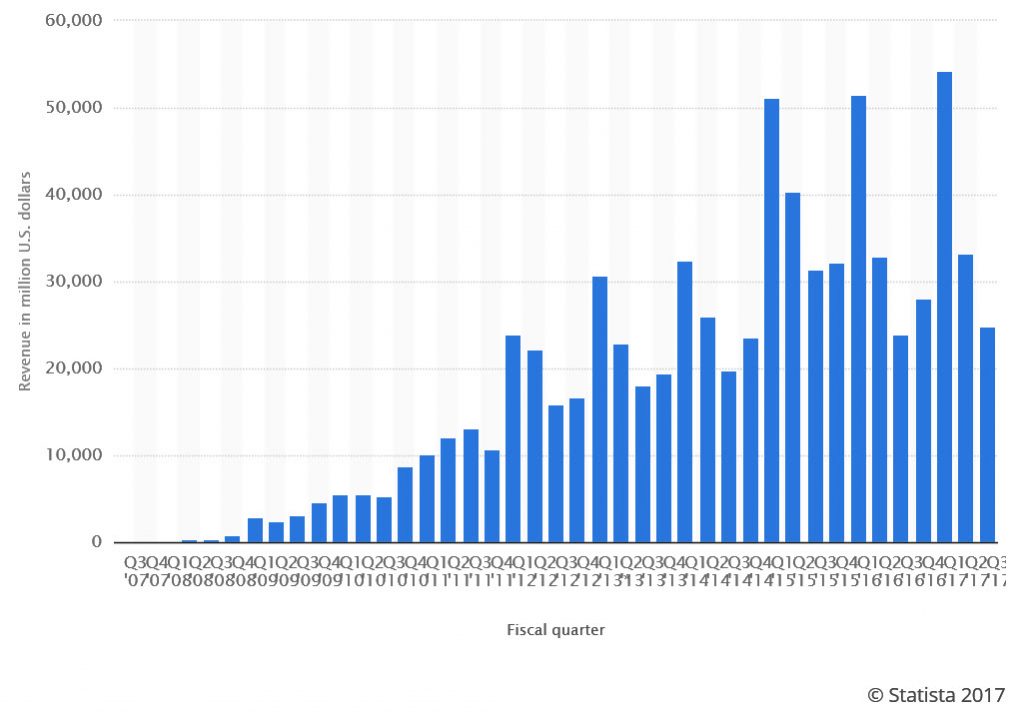 Apple has accomplished these results despite large price increases. According to Niall McCarthy, writing for Statista, and the chart below:

“The unveiling of the iPhone X was the most eagerly anticipated part of Apple’s launch extravaganza [on September 12, 2017]. The new handset made a daring design move in ditching the home button, while it now boasts a facial scanner and the ability to make animated emojis. For some fans, the enthusiasm of the event and the enormous hype surrounding the iPhone X will be tampered by the device’s exorbitant price tag. The iPhone X will cost between $999 and $1,149 for U.S. users. That makes it the most expensive iPhone to date, costing more than the iPhone 6s and 7 Plus, both of which hit the market at $949 (256GB). Back when the original iPhone was unveiled by Steve Jobs in 2007, the 4GB version of the device cost $499 and the 8GB version cost $599 (both requiring a 2-year contract).”