Professions Perceived as Most Ethical – and Most Unethical

Posted on January 10, 2018 by bermanevansretail

Today, we discuss the professions perceived as most ethical – and most unethical. And this builds on our coverage of ethical firms and marketing practices: World’s Leading Ethical Retail Firms and Do Company Ethics Affect Consumer Behavior?

For most of us, the leading study of ethics in the professions is from Gallup. Let’s look at its December 2017 U.S. poll results.

U.S. Professions Perceived as Most Ethical – and Most Unethical

For several years, Gallup has polled the American public to learn how the ethics of 22 different professions are perceived.

Before reading further: Which professions do YOU view as the most ethical? And as the most unethical? In alphabetical order, here are the 22 professions:

After doing your ranking, review Gallup’s December 2017 findings. And study this chart. 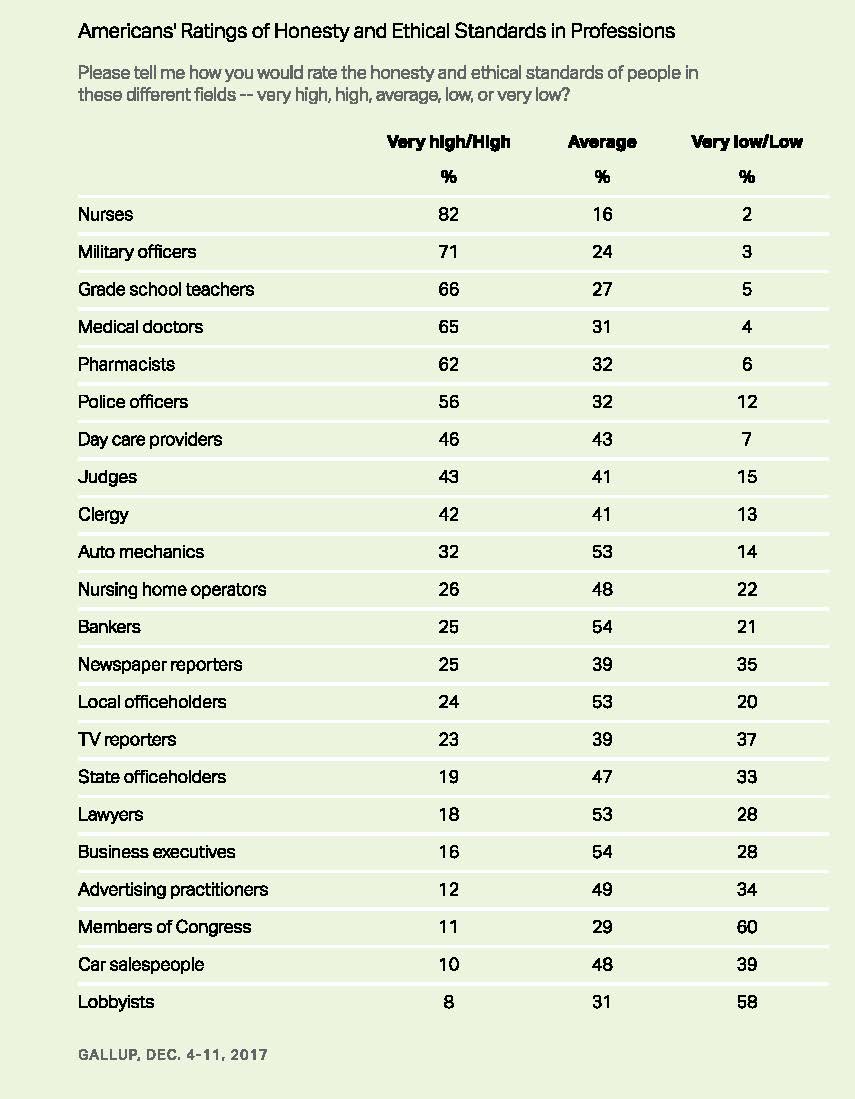 “For the 16th consecutive year, Americans’ ratings of the honesty and ethics of 22 occupations finds nurses at the top. And more than eight in 10 (82%) Americans describe nurses’ ethics as ‘very high’ or ‘high.’ In contrast, about six in 10 Americans rate members of Congress (60%) and lobbyists (58%) as ‘very low’ or ‘low’.”

“In sum, a majority of Americans rate six groups as ‘high’ or ‘very high’ for honesty and ethics. Besides nurses, that list includes military officers, grade school teachers, medical doctors, police officers, and pharmacists. Although the rating of pharmacists remains high, it fell 5 points from 2016. And this may reflect the opioid crisis.”

In 2017, “only members of Congress and lobbyists get majority negative ratings. Yet, the other 14 occupations rate ‘average’. Lawyers, local officeholders, bankers, and auto mechanics have majority ‘average’ marks. Also, the public is divided between positive and average rankings for both judges and clergy. And these two groups require honesty and ethical standards.”

1 Response to Professions Perceived as Most Ethical – and Most Unethical