Posted on January 15, 2018 by bermanevansretail

As we read regularly, many retailers are having tough times. Today, we study how to recognize declining retailers: three stages of decline.

Previously, we discussed other types of failure. For example, see Reasons Why Many Startups Fail and Why Don’t Some Store-Based Retailers Get It?

According to Retail Dive, these retailers filed for bankruptcy projection in 2017. Many of the firms continue in a weakened state. But others have gone out of business:

Now, click the image for a description of each firm’s status.

And view CNN’s video on U.S. malls and shrinking retailers.

Though not always considered as such, data analytics must start with knowledge of what to monitor. In the case of declining retailers, it is essential to be aware of their stage of decline.

With the preceding in mind, let’s look at the framework devised by Outcalt & Johnson: Retail Strategists. That firm operates Retail Turnaround Experts. And it founded the Retail Owners Institute.

According to Outcalt and Johnson, eight “vital signs” indicate a retailer’s stage of decline. As shown in their chart, these vital signs can be placed into three stages:

In stage one, retailers have entered decline. This is the best time to modify strategies and tactics. Why? Because it is easier to turn performance around. By the time retailers move to stage three, it may be too late to fix things. Why? Because the vital signs are so off, it may not be possible to successfully modify them. 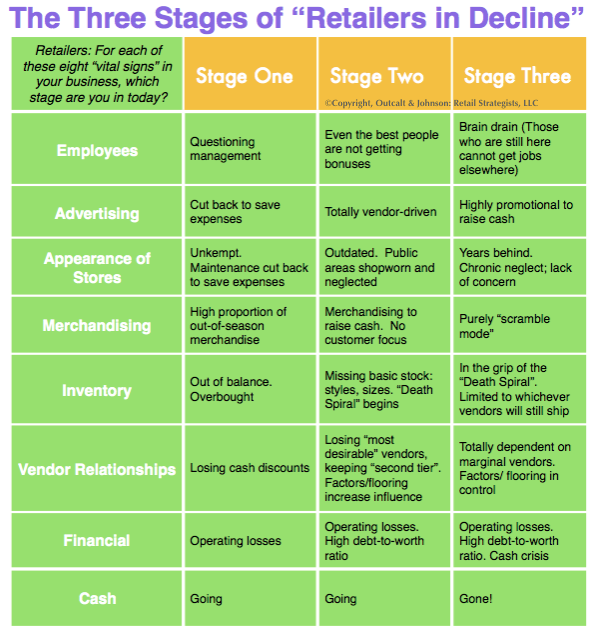