Posted on September 2, 2017 by bermanevansretail

McDonald’s and Coke know many consumers want healthy food and beverages. As a result, they added to their healthy offerings. Our posts on healthy foods include these. McDonald’s: Healthier Menu Still a Work in Progress.   Are YOU Prepared for Today’s Health-Conscious Consumer?    Dutch Supermarket Plus: Getting Kids to Eat Their Veggies. Likewise, firms make healthy cereal due to presumed interest. An example of this is General Mills with Trix healthy cereal.

Healthy Cereal? Trix Is for Kids

In 1954, General Mills introduced Trix as a sugar-coated version of Kix. The “Trix is for kids” slogan dates to 1957!! Trix is popular enough for Family Guy to spoof it an episode.

In 2016, General Mills decided to remove the original Trix. The firm replaced it with a natural version. General Mills thought was a great idea. To the contrary, it it did not work. Why? Kids loved Trix as it was, not the new version.

“Yes, some consumers are clamoring for cold-pressed beet juice, and quinoa chips. But that doesn’t mean they don’t also want Red 40, Blue 1, and Yellow 6. General Mills learned this lesson the hard way. It started selling all-natural Trix in early 2016. It is made instead with radishes, purple carrots, and turmeric.”

General Mills is going to reintroduce the original Trix, artificial flavorings and all. It will go on sale alongside the more wholesome version in October. This reverses the firm’s’ pledge remove artificial colors and flavors from all cereals. It said its 7 all-natural cereals boosted sales by 6% in early 2016. At the same time, natural-ingredient haters made calls, E-mails, and social-media posts. It turns out consumers ‘don’t all want one thing.”

This image shows the look of natural Trix (left) and original Trix (right). 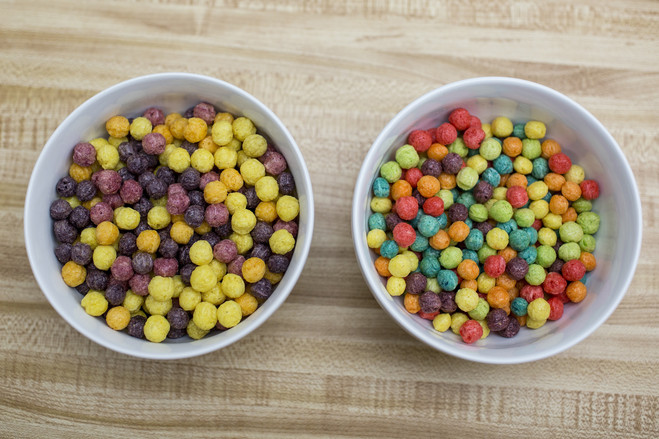 This image shows the packaging of natural Trix (left) and original Trix (right).